St. Jane Frances de Chantal is one of the largest parishes in the Archdiocese of Baltimore. The greatest part of our original boundary was water; our territory, comprised most of the peninsula beginning in the area of Solley Road and the headwaters of the Magothy River and extended to Gibson Island. Anne Arundel has become one of the fastest growing counties in the United States. 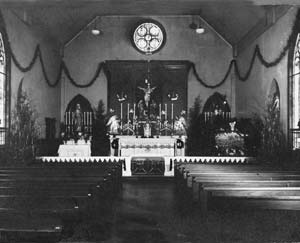 Ours, like most parishes, had a humble beginning. Around 1924 Catholics of this area attended Mass in a basement hall located in the vicinity of the southwest corner of the intersection of Ritchie Highway and Old Annapolis Road. The late Monsignor Leonard J. Ripple, Pastor of Saint Rose of Lima Church in Brooklyn, arranged that a mission church be established for the beach area. In the summer of 1925 Mass was offered on the lawn of a lot on Riviera Drive near Church Road. The priest lived in Brooklyn and traveled to the area for weekend masses.

The priests of Saint Rose of Lima Parish were to serve this area faithfully for twenty years. In 1945 Monsignor Ripple had a World War II surplus barracks building erected which was to serve as a parish hall.

By this time the population of the area had grown; there was new construction, and many, who were strictly summer parishioners before, became year-round residents. The Parish was too large to remain a mission. On November 22, 1946, the first resident pastor was appointed by Archbishop Francis P. Keough in the person of Father Raymond P. Kelly, an Irish priest from Fall River, Massachusetts who arrived here from Saint Peter’s in Hancock, Maryland. The only parish building was the chapel on Riviera Drive. Soon after his arrival, he bought a house on Riviera Drive to be used for a convent, and immediately set out in 1948 to build a school to be staffed by the School Sisters of Notre Dame, who had been Sunday school since 1947. The parish school, begun with 105 pupils in three grades in the barracks building in 1948, now has an enrollment of over 600 students. Our faculty grew from three sisters in 1948 to nine sisters and eleven lay teacher in 1968. Currently, our faculty numbers 60 teachers and staff.

Our parish’s building program and pastors

In 1948, the school was started. 1952 saw a new convent and the former convent became the rectory, the priest having previously lived in a house on Carroll Road. In 1954 and 1958, additions were made to the school. In 1954 the parish hall was also finished and was used for Sunday Masses in order to accommodate the constantly growing congregation. A new rectory was built in 1960, and the following year the completion of our present church. In 1966, remodeling and new construction saw our school expanded to twenty-two classrooms.

In 1967, our beloved first pastor Monsignor Raymond P. Kelly retired, and Father Thomas Fannon became our second pastor, but he only stayed with us for a short time before being transferred.

In 1968, the population growth and traffic had increased to such an extent that two Masses were offered at the Lake Shore School on Mountain Road.

St. Jane Frances de Chantal has experienced the phenomenal growth of the Baltimore suburbs in the 1950’s and 1960’s. The entire area is seeing more and more new construction, and the influx of residents each day promises to continue. Great credit is due to the priests and sisters who have labored here and to the parishioners whose interest and unselfish efforts have done so much to nurture our parish through its formative and quickly growing years.

Father Charles F. Muth arrived in 1970. During his stay we saw the renovation and rededication of the church. To the left of the center aisle, the beautiful stained glass windows in the church depict scenes of the life of Mary and the life of Christ on the other side. The Spiritual and Corporal works of mercy are shown in the lower panels of the windows. The wall behind the Altar repeats a symbol particular to Saint Jane Frances de Chantal. It is a painted Cross, embodying the IHS, her hallmark – the Cross with a symbol of Christ. The Cross is gold leaf, with a circle or halo of fire, a special symbol of Saint Francis de Sales, who was her spiritual director. Her other symbol is a heart bearing the name of Jesus.

The Chapel was added to provide a more intimate place to pray. Adoration of the Blessed Sacrament takes place in the Chapel. The Muth Room was added to create a place for the parish committees to meet. All of this took place in 1986, the fortieth anniversary of the parish. Monsignor Muth, after 21 years of service to our parish, retired in 1991.

Father Dennis Tinder arrived in 1991, after having served as pastor of Saint Joseph’s parish in Fullerton. Father Tinder’s leadership abilities earned him the title Monsignor. His vision of the parish is still active today. During his stay he immediately did some much needed remodeling of the rectory. Under Father Tinder we saw the establishment of the Knights of Columbus council named after our first pastor, Monsignor Raymond P. Kelly. Through his great love for education and the children of the parish he arranged for the creation of the Saint Jane Frances de Chantal School endowment fund. In Fall of 1995, Monsignor Tinder hosted the arrival and departure of Pope John Paul II when he visited the Archdiocese of Baltimore. After serving the Pasadena community for ten years, Monsignor Tinder moved on in 2001 to be Pastor at Immaculate Conception Parish Towson.

Father Kevin Schenning came to Saint Jane Frances de Chantal from Saint Joan of Arc, Aberdeen in June, 2001 to become our fifth Pastor. Father Schenning’s vision moved the parish to realize that more lay parishioners’ involvement was needed to plan for the future. In three short years Father Schenning motivated the parishioners to embrace their responsibilities for the parish’s life.

In January 2004, Father Schenning left to become pastor of Saint Joseph’s Parish, Fullerton. During this time without a Pastor, Father Brian Rafferty was appointed as a temporary Administrator. The Parish was shepherded very well by our Associate, Father Gregory Ferri and Mary Beth Barnes, our Pastoral Associate/Director of Religious Education.

In August 2004, Father John Cunningham became our sixth pastor. He arrived in Pasadena from Saint Thomas More Parish, Baltimore. A native of New York City, he immediately established himself at Saint Jane Frances de Chantal. Father Cunningham’s vision of establishing Saint Jane Frances de Chantal as a Tithing Parish was very well received. Under his dedicated leadership the celebration of the sixtieth anniversary of the parish was implemented. During this time Father Brian Nolan was our Associate Pastor. In February, 2008 Father John Jicha was assigned as our associate pastor. In June, 2008 Father Brian Nolan was assigned to Mount Saint Mary’s University in Emmittsburg.

In January 2009, Father John Cunningham ended his tenure as pastor, and Bishop Mitchell T. Rozanski became our Temporary Administrator. After months of searching for a pastor experienced enough to handle the requirements of a large parish with a parochial school, St. Jane’s was blessed by the arrival of Rev. Msgr. Carl Cummings, who came to us from St. Agnes Parish.